Arthritis is very common but is not well understood. Actually, “arthritis” is not a single disease; it is an informal way of referring to joint pain or joint disease. There are more than 100 types of arthritis and related conditions. People of all ages, sexes and races can and do have arthritis, and it is the leading cause of disability in America. More than 50 million adults and 300,000 children have some type of arthritis. It is most common among women and occurs more frequently as people get older.

Common arthritis joint symptoms include swelling, pain, stiffness and decreased range of motion. Symptoms may come and go. They can be mild, moderate or severe. They may stay about the same for years but can progress or get worse over time. Severe arthritis can result in chronic pain, inability to do daily activities and make it difficult to walk or climb stairs.

Arthritis can cause permanent joint changes. These changes may be visible, but often the damage can only be seen on X-ray. Some types of arthritis also affect the heart, eyes, lungs, kidneys and skin as well as the joints. 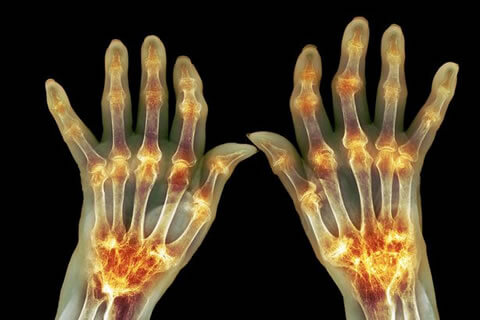 Osteoarthritis is the most common type of arthritis. When the cartilage wears away, bone rubs against bone, causing pain, swelling and stiffness

A healthy immune system is protective. It generates internal inflammation to get rid of infection and prevent disease. But with inflammatory types of arthritis, the immune system doesn’t work properly and mistakenly attacks the joints with uncontrolled inflammation, potentially causing joint erosion. Inflammation can also damage to internal organs, eyes and other parts of the body. Rheumatoid arthritis, psoriatic arthritis, ankylosing spondylitis and gout are examples of inflammatory arthritis.

Researchers believe that a combination of genetics and environmental factors can trigger autoimmunity. Smoking is an example of an environmental risk factor that can trigger rheumatoid arthritis in people with certain genes.

With autoimmune and inflammatory types of arthritis, early diagnosis and aggressive treatment is critical. Slowing disease activity can help minimize or even prevent permanent joint damage. Remission (little to no disease activity) is the goal and may be achieved by using one or more medications known as disease-modifying antirheumatic drugs (DMARDs). Other treatment goals include reducing pain, improving function and preventing further joint damage.

A bacterium, virus or fungus can enter the joint and trigger inflammation. Examples of organisms that can infect joints are salmonella and shigella (food poisoning or contamination), chlamydia and gonorrhea (sexually transmitted diseases) and hepatitis C (a blood-to-blood infection, often through shared needles or transfusions).

Uric acid is formed as the body breaks down purines, a substance found in human cells and in many foods. Some people have high levels of uric acid because they naturally produce more than is needed or the body can’t get rid of it quickly enough. In some people, uric acid builds up and forms needle-like crystals in the joint, resulting in sudden spikes of extreme joint pain, or a gout attack.

What You Can Do

The most important first step is to get an accurate diagnosis of what’s causing your joint pain.  Talk to your primary care doctor about your symptoms.  You may be referred to a rheumatologist or orthopedist, doctors who specialize in arthritis and related conditions.