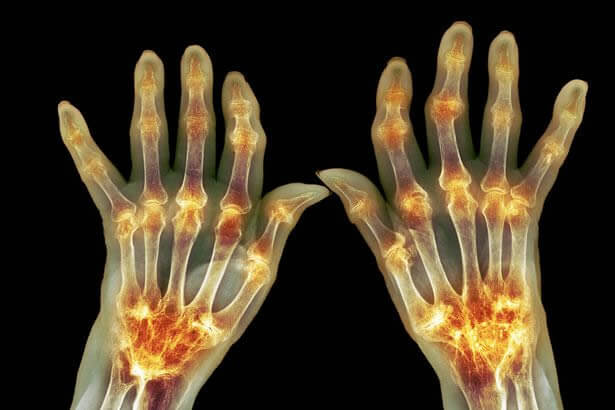 Rheumatoid arthritis is a chronic inflammatory disorder that can affect more than just your joints. In some people, the condition can damage a wide variety of body systems, including the skin, eyes, lungs, heart and blood vessels.

An autoimmune disorder, rheumatoid arthritis occurs when your immune system mistakenly attacks your own body’s tissues.

Unlike the wear-and-tear damage of osteoarthritis, rheumatoid arthritis affects the lining of your joints, causing a painful swelling that can eventually result in bone erosion and joint deformity.

The inflammation associated with rheumatoid arthritis is what can damage other parts of the body as well.

Signs and symptoms of rheumatoid arthritis may include:

Early rheumatoid arthritis tends to affect your smaller joints first — particularly the joints that attach your fingers to your hands and your toes to your feet.

As the disease progresses, symptoms often spread to the wrists, knees, ankles, elbows, hips and shoulders. In most cases, symptoms occur in the same joints on both sides of your body.

Rheumatoid arthritis occurs when your immune system attacks the synovium — the lining of the membranes that surround your joints.

Doctors don’t know what starts this process, although a genetic component appears likely. While your genes don’t actually cause rheumatoid arthritis, they can make you more susceptible to environmental factors — such as infection with certain viruses and bacteria — that may trigger the disease.

During the physical exam, your doctor will check your joints for swelling, redness and warmth. He or she may also check your reflexes and muscle strength.

People with rheumatoid arthritis often have an elevated erythrocyte sedimentation rate (ESR, or sed rate) or C-reactive protein (CRP), which may indicate the presence of an inflammatory process in the body. Other common blood tests look for rheumatoid factor and anti-cyclic citrullinated peptide (anti-CCP) antibodies.

Your doctor may recommend X-rays to help track the progression of rheumatoid arthritis in your joints over time. MRI and ultrasound tests can help your doctor judge the severity of the disease in your body.

There is no cure for rheumatoid arthritis. But clinical studies indicate that remission of symptoms is more likely when treatment begins early with medications known as disease-modifying antirheumatic drugs (DMARDs).

Side effects vary but may include liver damage, bone marrow suppression and severe lung infections.

These drugs can target parts of the immune system that trigger inflammation that causes joint and tissue damage. These types of drugs also increase the risk of infections. Biologic DMARDs are usually most effective when paired with a nonbiologic DMARD, such as methotrexate.